The National Theatre for Children (NTC) is a touring company that performs shows in all different parts of the United States. More than a million and a half people throughout the country will see a show performed by NTC in a year, making it one of the largest touring theatre companies in the country.

All NTC troupes have a cast of two actors and perform shows in either elementary, middle or high schools during the school year. We have up to 50 troupes performing in various parts of the country who are supported by our highly efficient and professional staff working from our home office in Minneapolis, MN. Tours range in length from one week to 10 weeks, although the majority of tours are six to eight weeks in length. Rehearsals take place in Minneapolis for seven days prior to tour start, after which troupes drive to their touring area. We expect our actors to be professional representatives of NTC and be goodwill ambassadors for our sponsors. Our shows, and all educational materials, are free to every school we visit.

All of our shows are original comedy pieces written by professional writers at NTC. Program titles include The Water Pirates of Neverland; Men in Plaid; Lights on for Louie; Mad About Money; Space Station Conservation; 2 Smart 2 Smoke; The Power of the Pyramid; The Energized Guyz; The Resource Force plus many, many more!

NTC employs approximately 70 - 90 actors during the school year (August - May). Actors are hired on a contract to contract, seasonal basis and may have the option of working for most of the school year. Our seasonal periods are fall (September - November), winter (January - March) and spring (April - May).

Starting actor salary is $400 per week, including per diem, plus a rehearsal stipend of $230. NTC pays for all lodging, transportation, tour vehicle, GPS and miscellaneous expenses while on the road. If you are from outside the Twin Cities metro area, NTC will provide your transportation to and from Minneapolis. Housing and transportation will also be provided for you during the rehearsal period. If you are hired for a tour, most likely your partner will be of the opposite sex. Tour partners share a one room, two bed hotel room when in rehearsal and on the road.

On tour, actors handle the set-up (15 minutes) and strike (10 minutes) of our sets and also take care of minor upkeep. An average weekday consists of performing at a school in the morning and at a school in the afternoon. Generally, at each school we do two shows, performing no more than six shows a day. Each show runs approximately 30 minutes. Professional directors work with you to create an excellent show and our tour coordinators schedule the tour for you making every effort to ensure a great touring experience! 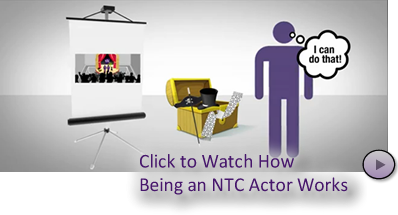